States whose residents are the best at managing their money

Higher income may be great, yet it doesn’t necessarily mean it makes managing money easier.

States with higher incomes may not be the ones where residents have the best credit scores, a new report from CreditCards.com shows. While some of that could be due to younger populations with short credit histories, other key criteria — such as high debt or delinquencies — drag down scores.

“Just because you have more income doesn’t mean you’re managing it well,” said Ted Rossman, industry analyst for CreditCards.com, which released the report Thursday. “A lot of people in places with higher income also have more debt.”

While a variety of factors go into a credit score, payment history (35%) and the amount you owe (30%) are the biggest contributors when it comes to FICO numbers, which most lenders use to make a decision on whether to take you on as a customer or not.

The five states where residents manage their money the best — based on their income ranking and average credit scores — all rank in the bottom half of total debt per capita, according to Rossman’s analysis of data from the Federal Reserve Bank of New York.

Beating out all the other states for best money management is South Dakota. Although its median household income of $56,274 is 33rd in the nation, its average credit score of 727 is tied for second-highest.

“A number of states that had middle-of-the-pack incomes ranked really well in terms of their credit score,” Rossman said. “Even though they have lower income, they’re doing a good job of managing their money.” 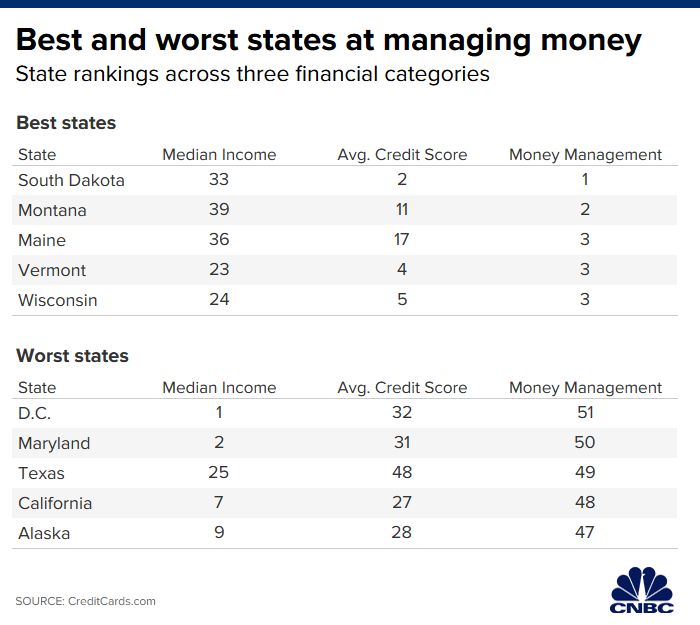 At the bottom is Washington, D.C. Its median household income is the highest in the country ($85,203), while its average credit score (703) ranks 32nd.

Part of the issue, Rossman said, is higher household debt — which can drag credit scores down. In the nation’s capital, for example, total debt per capita is $86,730 — the highest in the country.

While not all debt is created equally, the credit card version is often a challenge for consumers to keep in check.

Collectively, the nation’s credit card tab is $1.08 trillion, according to the latest data from the Federal Reserve. The share of accounts moving into serious delinquency — more than 90 days behind — is about 5.2%.

That rate, while relatively low, has been trending upward for about five years. The only category of consumer debt with a higher rate of seriously delinquent accounts is student loans, at 9.3%.

If you’re struggling with reducing your credit card balances, paying them off should become a priority, Rossman said. The average interest across all credit cards is 17.25%, compared with about 12% five years ago.

“See if you can get a credit card with a 0% transfer offer, or look at a personal loan as a way to consolidate debt and hopefully pay a lower rate,” Rossman said.

Also, look at your budget to see if you can trim back anywhere to free up more cash to put toward your debt, he said. Alternatively, consider a side gig.

More from Personal Finance:
One retailer trick you don’t want to fall for this holiday season
What to know if you need some relief from medical debt
Why your vaping habit could raise your life insurance costs

“The economy is good and there are lots of jobs,” Rossman said. “And remember that a second job doesn’t have to be forever.”

The idea is not to deprive yourself, but to reduce your credit card debt as much as possible, he said.

“Paying off credit card debt with high interest — that’s a big mountain to climb,” Rossman said. “If you continue to carry it, it’s going to hurt your finances.”